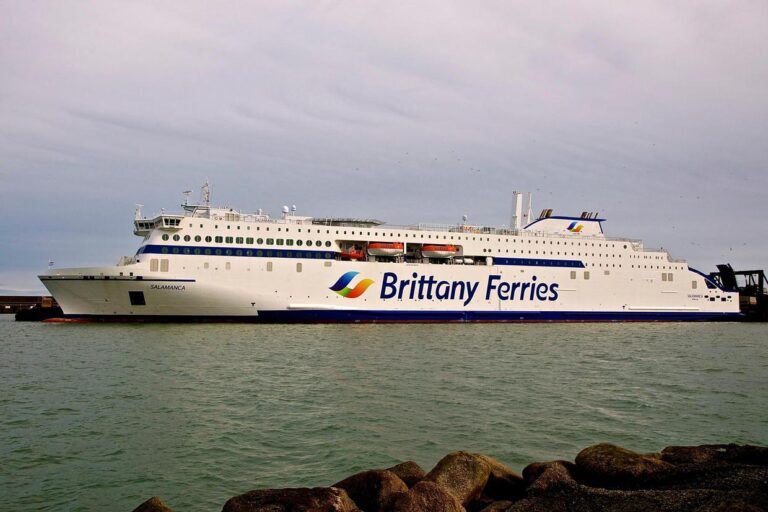 THERE was another first for Rosslare Europort, and indeed Ireland as a whole, on Wednesday morning as the very first LNG (liquefied natural gas) powered passenger ferry to operate in Ireland set off on its maiden voyage. The Brittany Ferries ‘Salamanca’ departed Rosslare at 6 a.m., bound for Bilbao in Spain, heralding in what the company are calling “a new greener era for passenger travel”.

Following significant passenger growth on its Ireland-France (46%) and Ireland-Spain (9%) routes in 2022 compared with 2019, Brittany Ferries is now offering greater capacity and an enhanced experience for passengers with the introduction of the luxury cruise ferry, Salamanca.

General Manager of Brittany Ferries in Ireland, Hugh Bruton said, “Salamanca is the first of four Brittany Ferries vessels to be powered by cleaner liquefied natural gas (LNG). She will operate throughout the winter and into next summer on the Cherbourg and Bilbao to Rosslare routes. The aim is to grow by 50,000 the number of holidaymakers sailing between Ireland and Spain – as we have recognised that the demand is there.

“This modern cruise ferry is not only more sustainable but is better equipped and more spacious and luxurious than its predecessor. That means more space for passengers to relax on board, greater comfort and more to do and to share during the voyage.”

As well as focusing on sustainability, Brittany says the addition of the Salamanca is also evidence of their commitment to both Ireland and Spain and their desire to build a tourist route between both destinations.