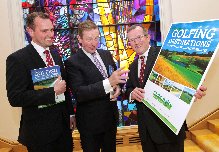 Club Choice Ireland, the leading provider to the British golfer of tailor-made golfing holidays to the East and South East of Ireland, recently launched its spectacular 2015 programme at the prestigious Mere Golf Resort & Spa in Cheshire, Manchester.

On return to Ireland, the directors of Club Choice, Tiernan & Larry Byrne, were congratulated by An Taoiseach Enda Kenny and Niall Gibbons Tourism Ireland Chief Executive at Government Buildings for the success of Club Choice Ireland in attracting the lucrative golfing market to Ireland; and for the significant contribution to Irish tourism that is imminent for 2015.

Club Choice Ireland is an alliance of some of the best hotels, resorts and golf clubs in the east and south east of Ireland.  Wexford is well represented by Kellys Resort Hotel, Ferrycarrig Hotel, Talbot Wexford, Whites of Wexford, Treacys Hotel and the Millrace Hotel; and Rosslare, Wexford, Enniscorthy and Bunclody Golf Clubs.

“Recent surveys show that golf visitors to Ireland are one of the highest spending demographics, says Club Choice Ireland, Managing Director, Tiernan Byrne.  Based on average figures, we can see that our golfers collectively spent close to half a million euro whilst in Ireland.  So it’s not just our hotels and golf club partners that benefit from this high-spending market but other local businesses too such as restaurants, pubs, taxis and local attractions.  We are grateful for alliances we’ve formed with local businesses, as are our visiting golfers, as they know they are getting the best service and quality.”

The 2015 programme was very well received at the launch event and Club Choice Ireland will now roll out its promotional campaign in Britain which includes hosting a series of prestigious Irish golf days, the distribution of over 5,000 ‘Great Golfing Destinations’ magazines, media familiarity trips, promotional drives with the Group’s travel partner, Stena Line; and more.