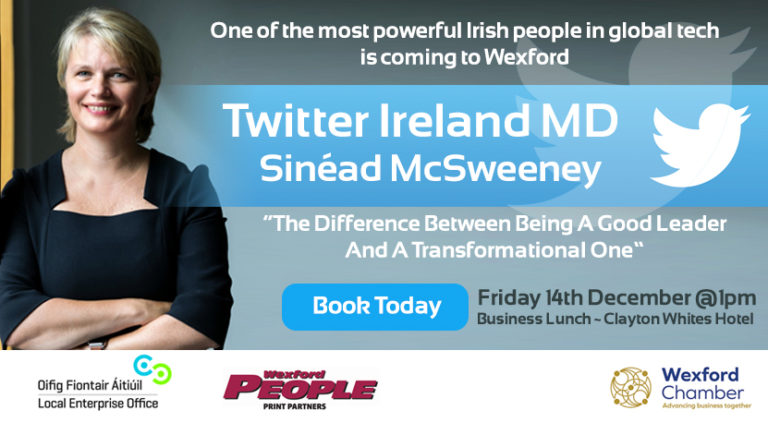 “The Difference between being a Good Leader and a Transformational One“

Sinéad McSweeney leads both Twitter’s Public Policy and Communications team in Europe, the Middle East and Africa as well as serving as the Managing Director of Twitter’s operations in Ireland.

Sinéad has been a key leader within the Twitter team since she joined the company in 2012. Prior to Twitter, Sinéad was Director of Communications for An Garda Síochána from 2007 to 2012 and before that was Director of Media and Public Relations for the Police Service of Northern Ireland between 2004 and 2007. From 1996 to 2004 Sinéad held a range of political advisory positions in the Irish government including roles as Special Adviser to the Minister for Justice, Equality and Law Reform and, prior to that, at the Attorney General’s Office. A native of Middleton, she studied law at University College Cork and qualified as a barrister in 1993. She began her working life as a parliamentary transcriber in the Dáil debates unit of the Houses of the Oireachtas.

Make sure to reserve your seat in Clayton Whites Hotel on Friday, 14th December for what promises to be a most engaging event.

Booking early is advised as this will be one of the highlights in the Chamber events calendar.

An event not to be missed!

TICKETS: Pre-registration is essential –  Tickets are available online from www.wexfordchamber.ie/shop, by emailing denisefarrell@wexfordchamber.ie  or by contacting Wexford Chamber on 053 9122226.