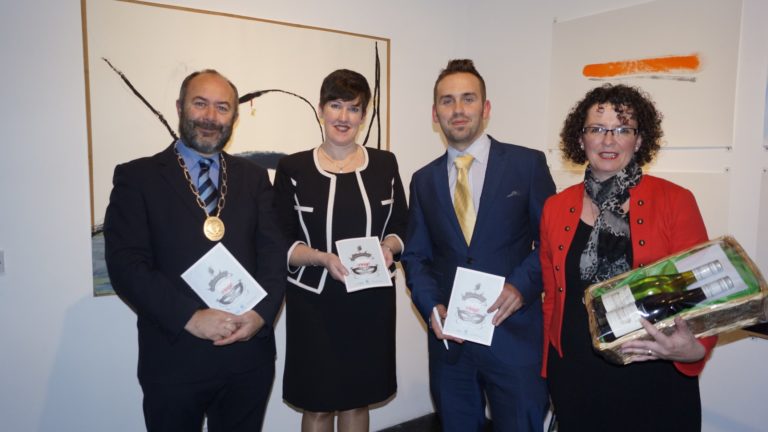 Wexford Arts Centre found itself packed out on Thursday night as members of the business and arts community came together to launch the 61st Wexford Fringe Festival.

The event marks the beginning of the Festival season in the town as it begins to count down to the 62nd Wexford Opera Festival which, along with the Fringe, starts next month.

CEO of Wexford Chamber Madeleine Quirke said she was absolutely thrilled to have the 2013 Wexford Fringe Festival guide in her hand, saying that it was a fabulous publication. She welcomed everyone to the launch “I’m delighted to see such a big crowd here for the start of a very exciting season for Wexford. This is what this town is all about.”

She thanked all those involved in the design and publication of the guide, saying that it was user-friendly, easy to follow and colourful. She paid special tribute to Chameleon Design, Niall Reck for the Fringe website and Shane Rochford for putting the guide together. She also thanked Failte Ireland for their support, Wexford Arts Centre for the venue, Celtic Link for sponsorship of the Fringe Guide and the many advertisers.

Tara Kerry from Failte Ireland said that Wexford was entering a fantastic season full of activity, adding that Wexford’s strengths lay in its culture and heritage. She said the guide was packed with events and she needed a week off to read through it all. She looked forward to seeing many familiar faces throughout the two weeks of the festival.

Rory McCall, Marketing Director with Celtic Link Ferries said that the crowd gathered on the evening highlighted how big a deal the Fringe was to Wexford people and said that it was the kind of event Celtic Link wanted to stand beside, as the fastest growing ferry company in Ireland.

“It was a very clear and obvious partnership for us. We bring people to Wexford for events like this. Being a 100% Wexford owned and operating out of Rosslare Europort, it is opportune that we can support such an amazing event right on our doorstep.”

Elizabeth White of Wexford Arts Centre said that they were delighted to be a partner to the Fringe and looked forward to future involvement. She also thanked those partaking the festival pointing out that without talent, there would be no fringe and she asked that these people be supported all year round.

Deputy Major of Wexford, Cllr. Joe Ryan said that Wexford punched well above its weight when it came to festival time and he commended the huge amount of work that had gone into the Fringe launch.

“It is great to live in a town with a sense of energy, drive and imagination such as this. The Arts is a great way to think outside the box and this guide is fantastic. I wish the Fringe festival all the best hope all of the events as well attended as they deserve to be.

“There is something for everyone and that is what makes our town different and great.”

The evening came to a close to the sound of soprano singer Aisling Williams, who will perform as part of the Enniscorthy Athenaeum Operetta in the Riverside Park Hotel on October 24, and music by the Featherhead Trio.