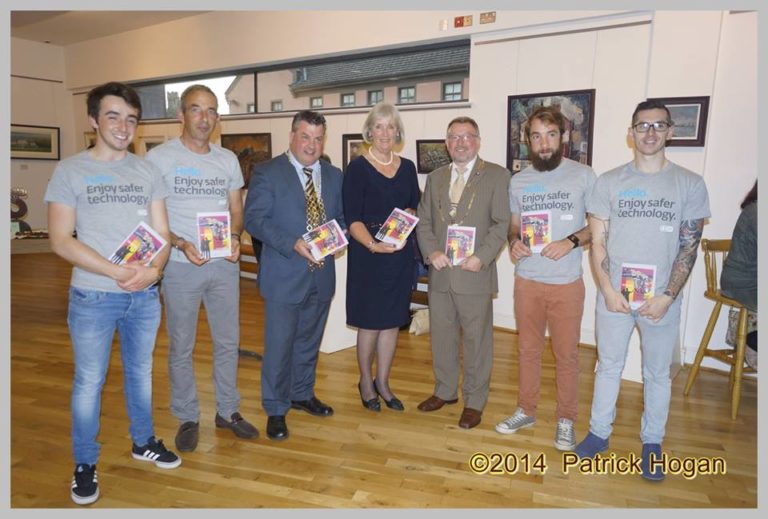 With just a few weeks to go to the beginning of the Festival season in the town, Wexford Fringe were thrilled to announce the 2014 Fringe programme at the recent launch in Greenacres Art Gallery on Thursday 25th September.

Crammed full of the stories, reflections and experiences of leading artists, producers and companies from Ireland and around the world, the 62nd Fringe Festival encompasses everything from drama to musicals, visual art to opera, Singing & Swinging Pubs to Spiegeltent and much more.

The Festival opens with a giant fireworks display in Wexford town on Wednesday 22nd October to announce 17 days of fantastic Fringe Festival events, which run in tandem with the famous Wexford Festival Opera, currently celebrating its 63rd year.

At the launch of the Fringe Festival and this year’s guide, Chamber President Martin Doyle said that Wexford Chamber was once again delighted to be part of Wexford Fringe.

“Year on year Wexford Fringe has grown and established itself as a very strong and independent festival with a myriad of events to suit all ages and tastes. The Fringe grants our local business community the opportunity to increase their profile and perhaps more importantly their turnover during the festival.  It has become a very valuable contributor to our economy both in terms of income and the opportunity to showcase our wonderful town and county.”

He paid tribute to Katie O’Connor and Tracey Morgan of Wexford Chamber who were instrumental in the co-ordination of the guide.

Carolyne Godkin, Tourism Officer with Wexford County Council commented that the Fringe and the guide were constantly evolving and that it was fantastic to see all of the local talent in one place, with over 300 events taking place in the town.  Carolyne spoke about the importance of enhancing the visitor experience, “I would encourage everyone to play a role in looking after the visitors needs, meeting their expectations and try to keep them here a bit longer. ”

This year, the Fringe welcomes ESET Ireland as a new sponsor, an I.T. company which protects against cyber threats online.  Richard Foley, Managing Director at ESET Ireland said that they were delighted and proud to be associated with the Fringe Festival.
“Wexford has a lot to offer and to be proud of – we are the model county and it’s time for us to show the world what we can do.”

Given the honour of opening this year’s Fringe Festival was Mayor of Wexford, Cllr. George Lawlor.
He welcomed the large crowd of local business people and those in the arts community to Greenacres, a “bastion for the arts and a wonderful place to launch the Fringe.”  There was, he said, a great vibrancy about the town at this time of the year and that was something that other towns were not lucky enough to experience.

“We have an amazing festival, it is something to behold and we are lucky it is our centrepiece.”  The Fringe had grown, he said, and many people were more active about attending its offerings.  He paid tribute to all of the artists and performers who were involved saying that every event helped to create a special atmosphere in the town.  The festival in 2012, was according to Deloitte, worth €8.5 million to the town and he hoped that this would grow.

He finished by encouraging everyone to get out and about and support this year’s Fringe, “If you’re out and about you won’t be using as much water!”

Madeleine Quirke, CEO of Wexford Chamber paid special tribute to Chameleon Creatives who designed the guide.  She also thanked Failte Ireland for their support, ESET Ireland for sponsorship of the Fringe Guide, the many advertisers and event organisers, and guitarist Richie O’Donnell who provided music on the night.

Wexford Fringe takes place from October 17th to November 2nd and Fringe guides are available from Wexford Chamber, the Tourist Office and many other venues around Wexford Town.  The full programme of events can be found on www.wexfordfringe.ie