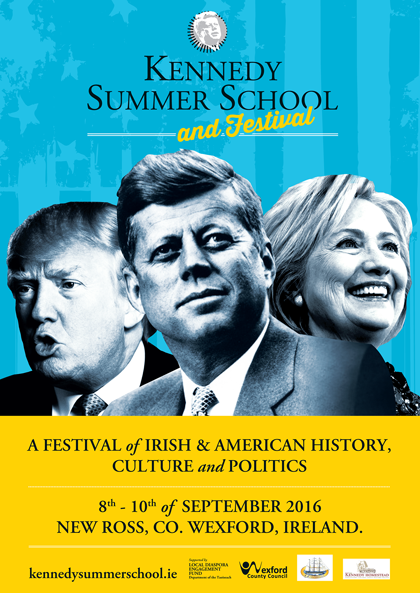 ‘We are delighted to be sending you a formal announcement of the 2016 Kennedy Summer School!

The Kennedy Summer School is billed as ‘A Festival of Irish and American, History, Politics and Culture’, and 2016 is set to be a dramatic year on all three of these fronts, and on both sides of the Atlantic. We have put together a very exciting programme for this year’s event, full details of which will be announced in the coming days. With close to 40 guest speakers participating over three days on a wide range of different topics; there should be something for all!

At this stage we are publishing the poster for the event, which gives a few hints regarding the topics up for discussion; the US Presidential Election will obviously feature prominently. We’re currently busy gathering leading contributors from the U.S. and Ireland for what we are describing as, “ The Strongest Panel on U.S. Politics Ever Assembled in Ireland”, a panel that will include numerous special sessions on the anticipated Trump V Hillary battle.

On the evening of September 8th, the ‘Kennedy Summer School’ will be opened by the American Ambassador, Kevin O’Malley. Our guest of honour and keynote speaker for the Summer School will be the former Governor of Maryland and Democratic Presidential Contender, Martin O’Malley. The Garda Commissioner, Noreen O’Sullivan will be interviewed for this year’s ‘Kennedy Summer School Interview’. We are also assembling an impressive panel on the impact of the 2016 Irish election, and on whether there is really anything “New” about our “ New Politics”. The Dunganstown Tea Party is also returning this year, and will feature a number celebrity chefs and other special guests. Other Irish guests include; Ann Doyle, Charlie Bird, Larry Donnelly, Colm O’Gorman, Tony Bates and many more. Watch kennedysummerschool.ie  for further details.

The Summer School is being held, as usual, in New Ross and its environs, over a 3 day period, Thursday 8th , Friday 9th and Saturday 10th of September, 2016. Tickets will be available from July 1st! We hope that you will help us spread the word, among your family, friends, colleagues, group members and anyone else who you think may wish to attend. We would also be grateful for any help you can give us in getting the word out there among your followers on Twitter or Facebook and other social networks.