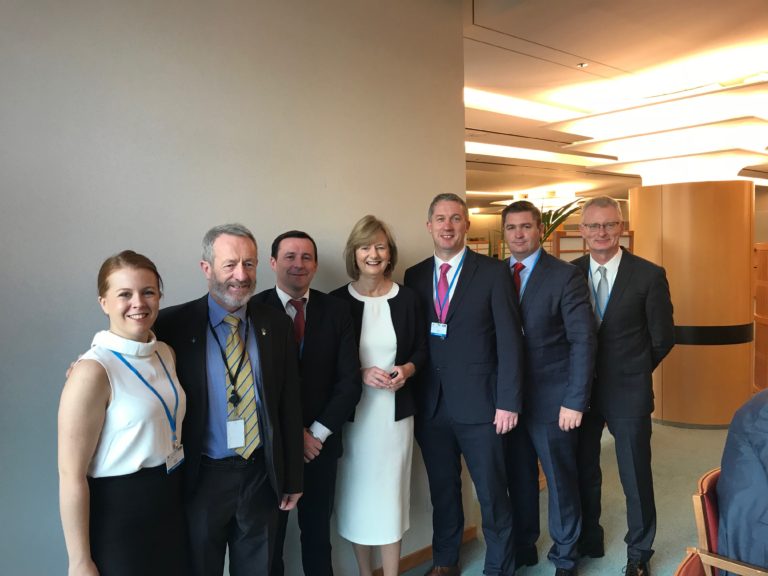 Future of Europe is Future of Business
Entrepreneurs gather in Brussels for fifth European Parliament of Enterprises
The EU must be open for business!

Speaking today, Chambers Ireland Chief Executive Ian Talbot, welcomed the strong Irish participation in the event and said, “With European elections due to take place next year, the objective of today’s Parliament of Enterprises is to enhance understanding between decision-makers and the real economy. Our delegation will have the opportunity to address key EU figures, including Trade Commissioner, Cecilia Malmström and Chief Brexit Negotiator, Michel Barnier, where we will highlight not only the priorities of Irish entrepreneurs but also how European policy can be made more business-friendly.”

The final European Parliament of Enterprises of the 2014-19 legislative term – gathering more than 700 entrepreneurs in the Brussels Hemicycle – sent a clear message to the ongoing debate on the Future of Europe: the EU must be open for business!

Entrepreneurs from across Europe debated and voted in sessions on skills, trade and the future of Europe in the presence of high-level institutional representatives, including European Parliament President Antonio Tajani; Trade Commissioner Cecilia Malmström; Chief Brexit Negotiator, Michel Barnier; and the Principal Advisor to the Austrian Presidency of the EU, Andrä Rupprechter.

The discussions and votes revealed concerns among entrepreneurs about skills mismatches, single market access and the direction of the global trade agenda. At the same time, the Members of the European Parliament of Enterprises expressed support for a strong, efficient and unified EU in order to tackle these challenges effectively.

On skills, EUROCHAMBRES President, Christoph Leitl, highlighted the problem of mismatches between supply and demand: “We have more graduates than ever in Europe and incredibly talented young people entering the labour market, but what good is this if they cannot find work and employers cannot find staff with the right skills? We must do better in ensuring that education prepares young people for current and emerging employment opportunities.”

On trade, following Michel Barnier’s comments, President Leitl stated: “Brexit negotiators from both sides must focus fully on avoiding a no-deal outcome next March. This is not about high politics, it’s about businesses, communities and jobs. The clock is ticking, so we must work efficiently to ensure an orderly, trade oriented UK withdrawal.”

On the future of Europe, President Leitl stated: “Today’s event has demonstrated that business is open to the EU, but the EU must be open for business! As entrepreneurs, we want a solid single market, external strength, a stable economy and a skilled workforce. The EU is part of the solution to these challenges, not part of the problem, but it will only succeed if its policies reflect the needs of entrepreneurs.”

In relation to the 2019 European Parliament elections, President Leitl stressed that “we must encourage Europeans to believe in the future.”

Voting highlights from the European Parliament of Enterprises 2018 included: