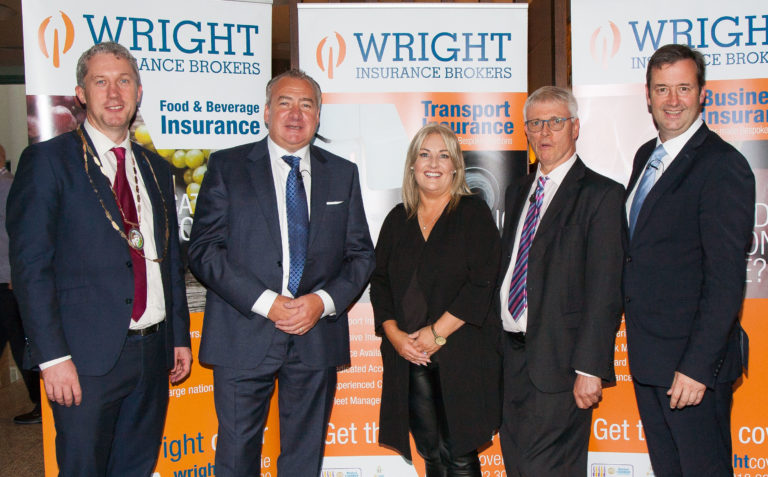 The seminar theme focussed on key issues impacting the audience. Operators in the Transport and Logistics industry made up the bulk of the audience. This is an industry the will be significantly affected by the outcome of the final Brexit negotiations. Insurance Reform is also a key issue for Transport and Logistics operators who have been  impacted by rising insurance costs and associated issues. The current current claims culture and personal injury judgements in Ireland are key areas to be addressed.

Minister of State, Michael D’Arcy opened the seminar with a summation of the status of Insurance Reform in Ireland. This was followed by an update from leading Economist, Jim Power, on the Brexit deal/no deal debate and the likely impending implications for the Transport & Logistics industry.

The seminar culminated in a panel discussion in which expert opinions were further expanded upon. The questions for the panel were pose by Broadcaster Anton Savage who chaired the discussion.

The British Ambassador, Robin Barnett, who joined the discussion panel commented, “This was a good opportunity to meet and hear from a key group of people who facilitate European and global trade.  Ensuring there remains frictionless access to the UK market for Irish exporters and vice versa is a key Government objective.  The recent White Paper put forward by the UK Government as the basis for a future EU-UK partnership would see goods and agri-food flowing freely across the border, with no need for any physical border infrastructure or related checks and controls.  Negotiating this outcome remains a top priority.”

Commenting on Insurance Reform, Tony Wright, CEO, Wright Insurance Brokers added; “While there has been a downward movement on Insurance premiums recently, it is unlikely to continue if fundamental legislative reforms are not implemented.”

Wright Insurance Brokers is a market leading business insurance broker with a long-standing association with the Transport & Haulage sectors. Our Transport team has developed a deep level of insight into the challenges facing operators in the sector and expertise in sourcing the best insurance solutions based on individual requirements. Read more about our Transport Insurance solutions.