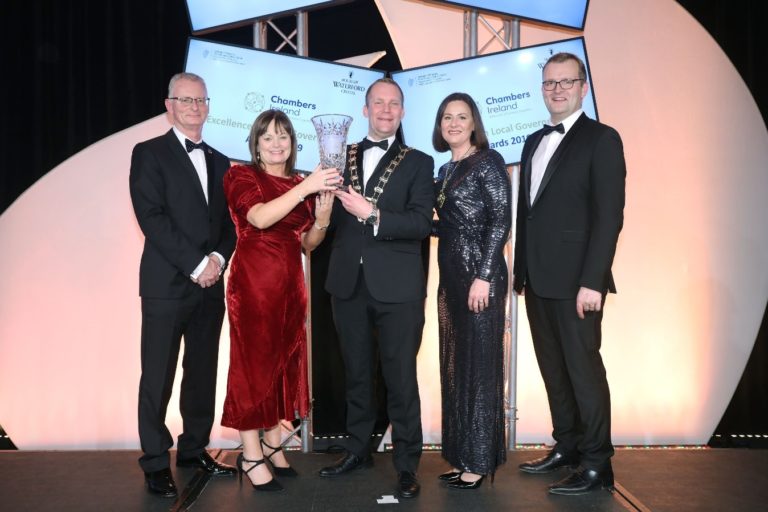 Fingal County Council was named Local Authority of the Year at the Chambers Ireland Excellence in Local Government Awards which took place yesterday evening (28 November 2019). The 16th annual Awards ceremony was held in association with the Department of Housing, Planning and Local Government and showcases and celebrates the best of Local Government in Ireland.

“Local Authorities continue to make substantial efforts across multiple areas of Irish society with wide-ranging positive impacts for local communities and the local economy; the Excellence in Local Government Awards serve as the platform to highlight the irreplaceable value that results.

As ever, it’s an honour for Chambers Ireland to host these Awards as well as a pleasure to highlight, while gaining insight into, the work and initiatives being produced at local level nationwide.

Congratulations to Local Authority of the Year, Fingal County Council, the 16 category winners, the shortlisted organisations and to the people behind all of these excellent projects.

Fingal County Council is the well-deserved winner of the overall Local Authority of the Year Award, who have shown engagement across the different facets of the Fingal Community, and with the development and sustainability of Fingal’s localities and environment, to achieve this accolade.

For their commitment to serving their community and also raising their area’s profile nationally as a stand-out destination, Fingal County Council deserve to be commended and have earned their Award title of Local Authority of the Year.”

“My Department is delighted to support the annual Chambers Ireland Excellence in Local Government Awards. The Awards offer an opportunity to acknowledge those in local authorities, elected members and officials, who – through their commitment, creativity and skill – continue to meet the dynamic and diverse needs of our changing communities.

Now in its 16th year the Awards are going from strength to strength. I congratulate everyone involved in the participating Local Authorities who have worked so hard to deliver the nominated projects for the benefit of their communities.”

There were sixteen awards presented on the night plus the overall award for Local Authority of the Year. Individual awards were sponsored by: European Recycling Platform (ERP), TEKenable, Healthy Ireland, LGiU Ireland, Fáilte Ireland and EirGrid.

Specially commissioned crystal awards designed by Waterford Crystal were presented to the winners on the night.

Fingal County Council – Our Balbriggan – Imagine the Possibilities – Get Involved.

Festival of the Year Award

Local Authority of the Year