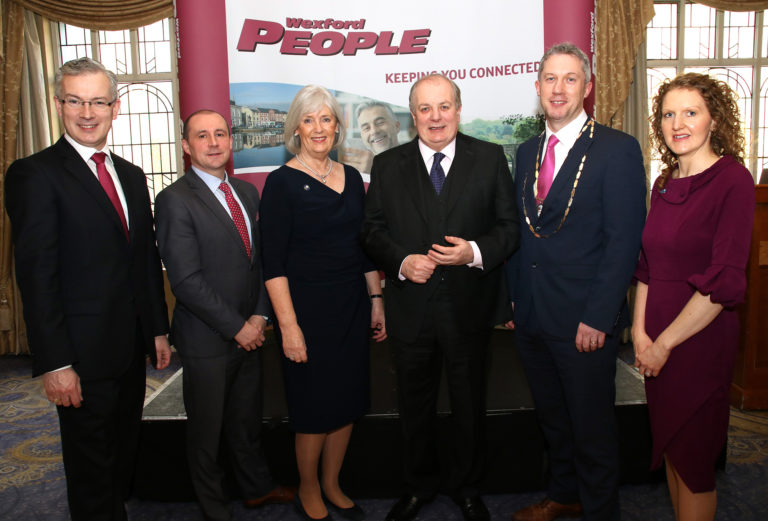 Entrepreneur, Dragon’s Den investor and marketing consultant Gavin Duffy proved himself a master of the motivational speech on the move during a lunchtime event in the Talbot Hotel on ‘How to Grow Your Business Through Smart Marketing.’

Hosted by Wexford Chamber and sponsored by the Wexford People, the entertaining talk was attended by over 200 business owners and representatives from around the county who were invited by Gavin to bring their products along for promotional photos.

People queued for the chance to have selfies taken with the guru who set up a local radio station at the age of 18. Now aged 58, he made a family occasion of his Wexford visit by bringing his wife, the former journalist Orlaith Carmody and two of their sons along.

As he worked the room with energy and humour, walking around the tables, telling stories and engaging directly up close and personal with individual guests, including Samantha Tweeting Goddess, his sons Lorcan and Cathal stood at the door, iPad and mobile phone in hand, recording their dad as he spoke.

‘We’re an equestrian family. When we think of Wexford we think of horses. Wexford produces great eventing horses and we’ve bought some of them over the years’, said the former part-owner with his wife for many years, of HRM, one of Ireland’s largest recruitment companies which he left last September.

Having grown up on the Main Street in Drogheda, a town with ‘seven shopping centres, four of them empty, a Main Street with broken teeth and numerous out of town centres’, he said he looked with envy at Wexford which has retained the vibrancy of its Main Street.

‘You’re probably the only provincial town in Ireland that has such a vibrant Main Street. That it is still intact is very special. You are lucky to have it’, said Gavin who has a ‘madcap idea’ with the Council in Drogheda to put a roof on the Main Street there. ‘I think that is what we are going to have to do on main streets, although in Wexford it’s too long, you could only roof part of it’.

Getting down to business, he said people talk about everyone shopping online nowadays, but ‘You can’t get your hair cut online and coffee doesn’t come online’, he remarked.

Offering advice on how much you should spend on advertising, he said most business spend 2% or less of their turnover on marketing. ‘You’re not in the race unless you spend 6%, that would mean spending three times more.  That’s for small businesses.  Big business should be spending 10%.’

‘I’m trying to get businesses to think about stretching it out a bit. People say ‘I don’t have the money’, he said, adding that many companies don’t realise how much they are already spending on what he called ‘arm-twisting advertising’ – sponsoring golf classics or other community and sporting events.

‘If you look at the stuff you are doing reactively and instead do it proactively.’

There were laughs of recognition when he addressed the topic of ‘word-of-mouth’ advertising. ‘Young people don’t even talk to each other today. That’s 1970’s and 1980’s stuff’, he exclaimed.

Introducing the first of his buzz phrases for people to remember, he asked, Are You Top of the Mind?  ‘If you ask people to name three supermarkets and you’re not in the top two, you have a problem. That’s the way it has to be for your business in the locality’.

Continuing the theme with the aid of a bullet point presentation, he told guests: ‘You are Not a Circus’. He said the circus comes to town once a year and puts posters up all over the place. It works because they are only in town for a few days. If you’re around for 365 days, circus advertising is not enough.

‘These are mistakes I’ve made myself’, he said, asking people to think of a third generation, family business in a provincial town that finds itself with unsold stock and puts a big sign in the window saying ‘Clearance Sale’. ‘What you’re telling your customers is; ‘don’t’ shop here until we’re really desperate and have to sell it to you at half price. A week later you’ll have people going around saying, ‘do you now, I think so-and-so is closing down’.

‘If you want to improve your sales, what I’m recommending to you is you’ve got to advertise, market and promote consistently. A slow drip is better than a big splash.  We’re not talking big money here,’ he said, outlining a specific ‘Magnificent Seven’ strategy for consistent advertising over 38 weeks during the year in a local newspaper at a cost of €4,000 or less. ‘Never has advertising been such good value in Ireland’.

He said ‘Brand, Boast, Bait’ are the three essentials of an effective advertisement and he offered samples of ones that caught his eye in the Wexford People, including Kelly’s Hotel, Wexford Bike Shop and Wexford Home Preserves promotions.

‘If you are going to advertise regularly on local radio, use jingles or get a professional voice-over’, advised the master, as he played a few successful jingles to prove the point. And if you want to reach people through social media, find someone who knows what they’re doing, he suggested.

The powerpoint screen showed a large chunk of rock with a tiny man standing beside it. ‘This is a 22 tonne piece of Tuscan marble and out of it Michael Angelo carved the statue of David,’ he said, switching to photographs of the famous sculptural masterpiece which he used to illustrate his point that the solution to the success of any business lies within the business itself, in carving away the excess and revealing the gem inside, not in ‘chasing the next big thing’.

Wexford Chamber CEO Madeleine Quirke welcomed everyone to ‘the best start any Chamber could possibly hope for in terms of its inaugural event for 2018’ which was trending number one on Twitter through the presentation. She said the organisation was fortunate to have an opportunity to collaborate with a media partner of the calibre of the Wexford People which had a big impact on tickets sales, resulting in over 200 people attending.

‘Thanks to them we have Gavin Duffy here today’, said Madeleine who was the subject of a ‘fake news’ report by the guest speaker who claimed that she’s not actually retiring soon; she is leaving to become former President Karl Fitzpatrick’s campaign manager in the General Election!

Responding to Gavin’s comments on the Main Street, the CEO said that the local authority had worked hard to ensure that the integrity of the town’s main shopping street was protected. Newly-elected Chamber President Niall Reck, wearing the chains of office officially for the first time, happily described it as ‘a sold-out event’ and said it was wonderful to see what can be achieved through collaboration.

Niall described the Wexford People newspaper as ‘the heart of our community’ and added: ‘They support the town and the businesses in our town’.

The President said Wexford Chamber is a leading organisation of 250 small and large business members who are its life blood. ‘If you are a member please be an active member and if you are not a member, please become one as your chamber needs you, your county needs you.’