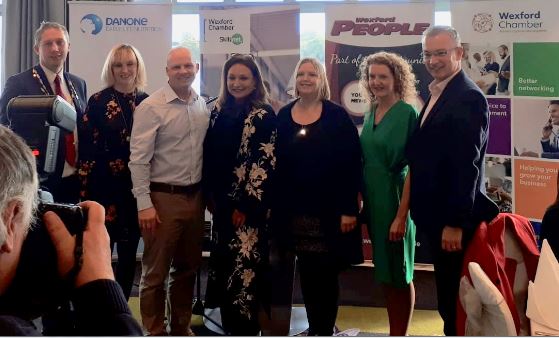 Dragon explains The Power of You

Wexford Chamber got fired up in the Ferrycarrig Hotel last week when we welcomed former Dragon on Dragon’s Den, Norah Casey, as our latest speaker at a business networking lunch sponsored by Danone Nutricia, Wexford Chamber Skillnet and supported by media partner, Wexford People.

Almost 100 people attended the event; the vast majority of attendees were women involved in various businesses around the county, a very notable contrast to what is usually a very gender-balanced attendance.

Ms Casey is the third Dragon from the popular TV series to address members of the Chamber in the past year, though she was quick to distance herself from any Presidential run, or the candidate who shared her surname!

Opening the proceedings, Chamber President Niall Reck welcomed Ms Casey, who is the owner of the Harmonia Publishing Group, to the sunny south-east, complimenting her extensive CV of entrepreneurship and innovation.  He thanked the hotel for their hospitality and the Chamber team for their hard work in putting the event together.

Ms Casey’s discussion was entitled ‘The Power of You – The Importance of Navigating Your Own Life’, and she spoke of how she had spent her whole life studying strategy and was a total geek at heart.  She discussed how people went through a ‘decade of indulgence’ from the age of 23 to 33, after which day-to-day life took over and many people, effectively, went into ‘the slow lane’ and stopped looking forward.

She remarked, ‘You have until you are 82, the average life expectancy. All of the things you want to do, you still can, and you owe it to the people who can’t, to get out and grab life. Set your internal SAT-NAV towards something or else you are just idling by the curbside.’

She said that this generation was constantly trying to recreate things as if everything had been invented and the innovative side of people’s brain was lazy.

To that end, she recommended a booked called ‘Blue Ocean Thinking’, saying it was something that she encouraged her own son to partake in as well.  She gave two examples of this, which basically called on people to think of something that had never been invented before. The first was the Nintendo Wii and DS, game consoles which catered for the whole family and for women, while the second was Cirque du Soleil, which was a reaction to the standard circus and the negative connotations around it.

‘Bring your 12-year-old into your business, they will imagine things better than any adult’, she remarked, adding that, as it stood, most businesses operated in red oceans, bloodbaths between similar businesses instead of embracing innovation.

When it came to women in business, she believed that confidence, rather than competence was holding women back. She said women were better at calculating risk which was why, she pointed out, that most women in CEO roles had come the finance route.

She referred to Christine Lagarde who famously remarked that Lehman Brothers should have had more Lehman Sisters.

That said, Norah pointed out that risk was necessary in many cases and that once you took a risk once, it became easier to weigh up and take them more often. She also referred to women’s tendency to ruminate which, she said, could be detrimental but also very valuable when it came to understanding why something failed.

Over the years, Norah has learned to invest in a person than an idea, saying that this was something that had become clear during her time on Dragon’s Den where some of her investments would have been better ‘flushed down the toilet’.

Fielding a series of questions from the floor, she stressed that she was in favour of collaboration and cooperation: ‘It’s men and women, not men versus women. Rather than Me Too, I’d prefer Us Together.’