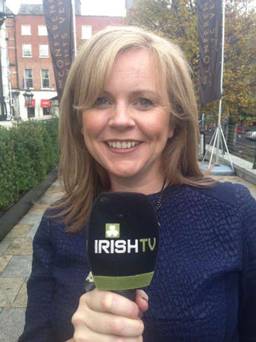 An online entrepreneur and author of Tweet Your Way to Success, Samantha is popularly known for founding Irish Biz Party, a social media platform for small business owners.

‘The show is a golden opportunity for local clubs, businesses and societies to publicise their events on television to a national and global Sky TV audience,’ Samantha said.

‘Bringing local stories to a global audience is Irish TV’s motto and we are asking the people and organisations in Wexford who make things happen to contact us and tell us their story.

‘We will travel the county covering events and reporting on the essence of life in Wexford. If people have an event they would like to see featured to a substantial audience on Sky and other platforms we will be delighted to hear from them at wexford@irishtv.ie.’

Irish TV began broadcasting in May, 2014 and is introducing more original programming every week.

Each of the 32 counties has their own half-hour County Matters show once a week, produced by Irish TV’s own nationwide production network.

‘Our upcoming Spring schedule includes original programmes such as the new season of the popular Cooking with Treyvaud, with unconventional TV chef Paul Treyvaud,’ said Head of Broadcast Malachi Cush.

‘Also coming to your screens is new agricultural programme Grassroots, which is a weekly series delving into the business of farming through site visits, interview with industry experts and a focus on emerging technology.

‘Country music will also feature heavily this Spring, with a new season of On the Road with Lisa McHugh and a special tribute show with Big Tom and the Mainliners, as well as documentaries on Dolores Keane, Margo O’Donnell and a new series called Showband Stories looking at the golden age of showbands in Ireland.’