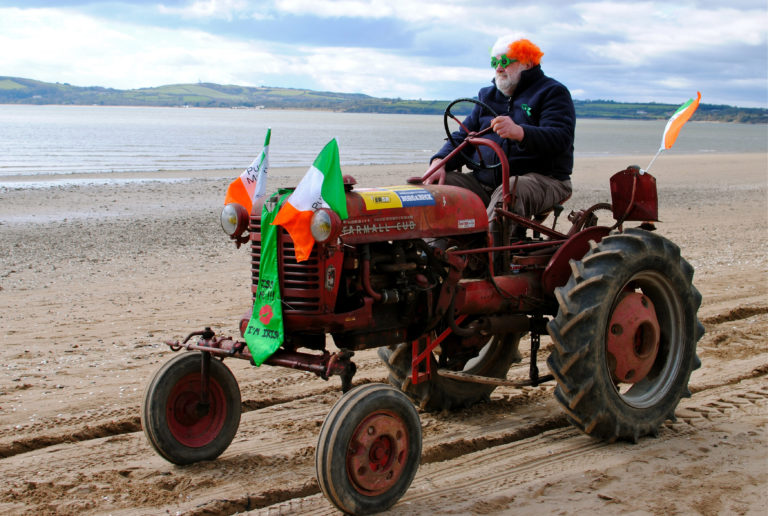 St. Patrick’s Day in Wexford is one of the biggest days of the year, with celebrations and parades taking place throughout Wexford town, New Ross, Enniscorthy, Gorey and even on a beach in Wexford.

Duncannon beach will host the country’s only Beach Parade this St. Patrick’ Day. The parade will start outside the Star of the Sea church in Duncannon at 4pm travelling down the Main Street and from there it will go onto the beach and travel down Duncannon beach lead by the 2016 Grand Marshall John Delaney of the FAI. Prior to the parade start time there will be entertainment on offer in the village with live music, zorbing, bungee trampolining and family fun events. The parade will be made up of local scouts, girl guides, and local sporting clubs with prizes on offer for the best walking float and the best business float.

Possibly one of the earliest parades to take place on St. Patrick’s Day in Ireland will get underway in Bunclody town from 10am. Floats, marching groups and entertainers will gather and parade down the towns’ Main Street.

One of the oldest parades in the country will continue its tradition in Wexford town; starting back in 1917 and continued until the outbreak of world war two. In 1946 the parade was re-started. This year the parade will commence at 11am from the junction at Fisher’s Rowe, William’s Street and weave it’s way through the town to pass the reviewing stand at the Quay Front adjacent to the Bridge. This year’s parade will see many floats and numerous marching bands and will be one of the country’s best parades.

In Gorey the St Patrick’s Day Parade will commence at 3pm under the theme ‘The Green Dream’. Festivities will get underway from the Enniscorthy road on to Main Street and finishing on Esmonde Street.

The St. Patrick’s Day Parade in Enniscorthy gets underway at 2pm. Floats and vehicles will join the parade on The Promenade & there will be lots of entertainment on offer in the Market Square with music, dance, and children’s entertainment and free face painting.

The New Ross town St. Patrick’s Day parade will get underway from 2pm travelling from Irishtown down the town’s quayside to the viewing platform at the Dunbrody visitor centre. Filled with marching bands, floats and entertainers it’s one not to be missed.

At Carraig on Bannow the seventh annual St. Patrick’s Day parade is set to take place at 2pm from the school field, the entertainment is set to be top notch with prizes for ‘best band’, ‘most comical’ and ‘audience involvement’.

For further details on all of the St. Patrick’s Day festival activities in Wexford see www.visitwexford.ie