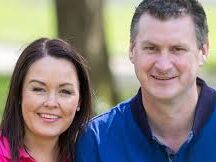 The Dunnes Stores Simply Better collection has a well-deserved reputation for award-winning food and drink. Behind the scenes it also champions small Irish producers, helping them to grow while doing what they do best.

This month we chat to Laura Sinnott of Wexford Preserves about the importance of using traditional jam-making methods and great Irish ingredients.

Based in New Ross, Wexford Preserves is run by Laura and her husband Tom but it was Tom’s aunt, Ellen O’Leary who founded the company near Rosslare back in 1988. “They grew their own fruit and Ellen’s a woman who doesn’t like waste so she started making her own jam with any surplus fruit,” Laura explains. “The jam became more popular than the fruit so she realised she was onto something and she and her husband Sean set up their own business.”

When Ellen said she was planning to retire in 2007, Laura and Tom decided to take the business on. “We saw a great opportunity for ourselves to take it over and to keep it in the family,” Laura says. Ellen stayed on board for a year, teaching Laura all her recipes and helping guide the new owners.

Another opportunity presented itself just a few years later in 2012 when the Dunnes Stores Simply Better team got in touch, At first, Laura and Tom were afraid that it was too big of an ask. “The way we do things is still very homemade and artisan – we cook with saucepans!” Laura laughs.

“We thought that doing own brand products for Dunnes Stores would be huge and we couldn’t manage it, but the Simply Better team said no, we’ll work with whatever your capabilities are and it went from there. It’s fantastic, it’s the best thing we ever did really.”

The partnership enabled Wexford Preserves to move out of a small unit and since then the range it produces for Simply Better has grown every year. There are now eight jams and marmalades, as well as a selection of products for Christmas. Last May saw the launch of a number of chutneys which have also been extremely successful. The products have won numerous awards and at the end of last year Wexford Preserves took home the Supplier of the Year Award in the Irish Quality Food and Drink Performance Awards.

When asked what makes their products unique Laura points to the fact that they use top quality ingredients. “What makes our products special and gives them that great taste is we’re sourcing Irish ingredients, even down to our garlic and chilli,” she says. Our neighbours grow the tomatoes so we don’t have to go too far for those! We’ve also struck up a relationship with Eamon Crowley of the Irish Onion Company in Bandon, Co Cork. He’s working with us no on volumes and things like that. It’s great, the guys we work with are really flexible. They want to grow as well, it’s a win-win.”

Laura and the team still make their jams and marmalades with the open pot boiling method, “I think using traditional methods is what gives us our edge. We don’t have a huge kitchen, or a factory, we just have lots of big saucepans! It makes a huge difference, you can taste the quality,” she says.

Those saucepans will be put to good use this month with the arrival of marmalade season. Wexford Preserves makes a Handmade Simply Better Seville marmalade, which won Gold in the World Marmalade Awards 2020. The team sources the best oranges from organic farmers in Seville, Spain. “We work with Jose and Amadora Battista in Seville; we’ve gone over to visit their farm and the fruit is exceptional,” Laura says. ”So that will be coming in to us during the first few weeks in January. It’s a huge amount of work, the marmalade, it’s a two days process. The fruit is washed and cut, we take the seeds out and use them as a natural pectin in the marmalade. It’s a lot of work but it makes a really top class product. That will be in stores at the end of January.”

It will be a busy start to the year for Laura and the team and there is much to look forward to as well. “We have some new product development going on with the Simply Better team,” Laura says. “So it’s full steam ahead for 2021!”.