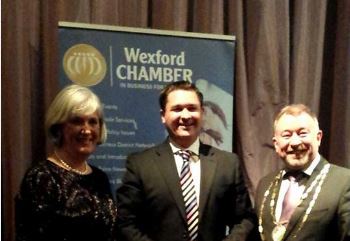 Wexford Chamber was recently ranked the 3rd best Chamber in Ireland in terms of activity, profile and facilitation of events for members according to Chambers Ireland CEO, Ian Talbot.

However, not being satisfied with this, Wexford Chamber is already planning for greater success in 2015. This was evident at its AGM last night, with the ratification of its board. The incumbent President, Martin Doyle, was re-elected for another twelve month term and he will be supported by the newly elected Vice President, Karl Fitzpatrick. Karl has been an active board member since 2010 and has been instrumental in establishing successful networking initiatives on behalf of the Chamber and most recently he was commended for reinventing the highly successful 2014 Wexford Business Expo.

The board also confirmed two new appointments with local businessmen Graham Scallan and Niall Reck. Following the announcement of these appointments, CEO of Wexford Chamber, Madeleine Quirke stated that “the strength and diversity of our board is indicative of Wexford Chamber’s commitment to progressing business in the town and I am confident that these new appointments will enhance our highly professional and fully committed Board and will work to benefit the local business community.”