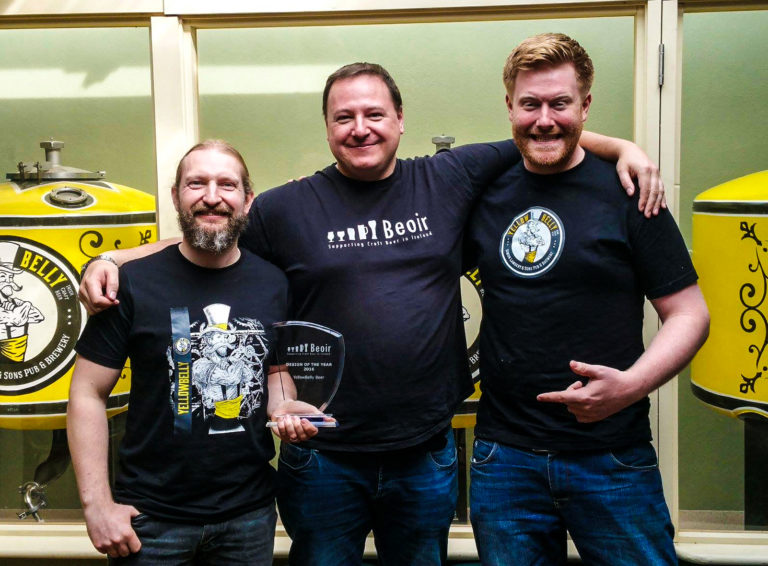 YellowBelly Beer, one of Ireland’s newest microbreweries based in Wexford, have just scooped the very first ‘Design of the Year’ Award from Beoir, the independent consumer group responsible for supporting and raising awareness of Ireland’s native microbreweries.

The brewery has been making waves in the Irish drinks industry and amongst craft beer drinkers since opening their doors in 2015 with an exciting range of beers and accompanying illustrations featured across their branding, labels and even their own comic book series, all of which is created by YellowBelly Beer’s designer Paul Reck.

Beoir Chairman, Reuben Gray, presented the award at YellowBelly Beer’s current home, Simon Lambert & Sons brewpub in Wexford Town. “This award is an acknowledgment from our members that there are many Irish microbreweries really pushing the boundaries of their artwork and branding at the moment which is of huge benefit to the growing market share of Irish microbrewed beer being consumed in Ireland” said Gray. “YellowBelly Beer are recipients of our first ‘Design of the Year’ Award due to constantly reinventing their truly unique artwork across labels, branding, merchandise and their comic book series which is of a world class standard.”

YellowBelly Beer are currently expanding their brewery at a brand new unit in Wexford, increasing their production capacities to supply more of their award-winning beers to the Irish market as well as setting themselves up for export which they hope to get underway in 2017.

You will currently find all of their latest beers at Simon Lambert & Sons in Wexford, as well as a number of independent off-licences and craft beer focused pubs throughout Ireland.