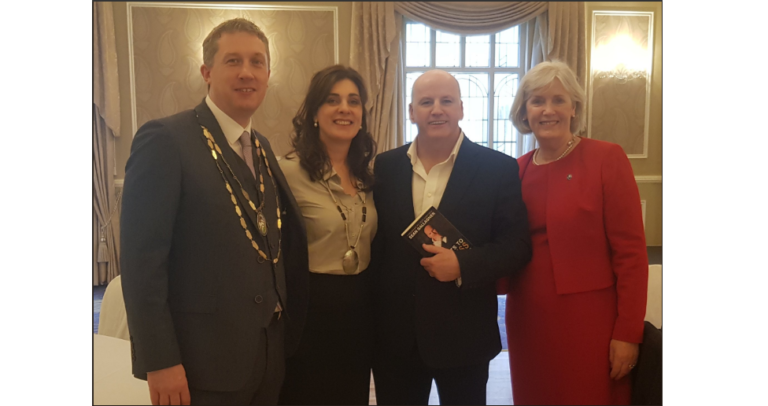 Over 160 Chamber members and business people packed into the Slaney Suite of the Talbot Hotel on Friday 16th February 2018 for the annual President’s Lunch, at which former Dragon’s Den judge Sean Gallagher was the guest speaker.

The Mayor of Wexford, Cllr Jim Moore welcomed the crowd referring to County Council plans that would be delved into by Council CEO Tom Enright later in the afternoon. He remarked that it was an ambitious plan and it was essential that they created the right environment for growth on a local, national and global scale. He said the plan was an example of ‘strategy, longtermism and politics coming together’.

Chamber President Niall Reck said that he loved helping to grow business in Wexford and had jumped at the chance to do his bit for Wexford through his involvement in the Chamber. Wexford, he said, was a great place to work and do business and the Chamber was a key driver of a variety of project and initiatives.  He paid tribute to outgoing CEO Madeleine Quirke who, he said, had become like Beyonce or Prince in that she was recognised by just her first name!

He acknowledged that work needed to be done for the future and said they would support anything that would enhance jobs and business.

Pointing out that 2018 was the Chinese year of the dog, he encouraged everyone to grab their opportunities by the scruff of the neck and adopt a ‘We Can’ attitude.

Giving the keynote speech, Sean Gallagher said he loved being in rooms filled with such energy and vibrancy, saying he was optimistic for the future of Ireland. He stressed the importance of collaboration and the notion of taking a risk.

He said, ‘All success comes from risk. Everything we don’t have exists on the other side of our comfort zone.  Your future is nobody else’s job – it’s yours.’

He remarked that Wexford could not be another Dublin or Cork, but instead had to find its essence and build on those strengths, adding that education was a key factor in growing business in the county.

The availability of commercial space he said, was an issue, pointing out that Foreign Direct Investors did not understand An Bord Pleanala but wanted to see bricks and mortar, ready for use.

He acknowledged that they were living in a time of unprecedented change and said that those most adaptable to that change would survive. He encouraged businesses in Wexford to set objectives, goals and targets. He stressed the importance of confidence, leadership and, above all, perseverance.

‘You have your own challenges here but focus on the solution, not the problem.’