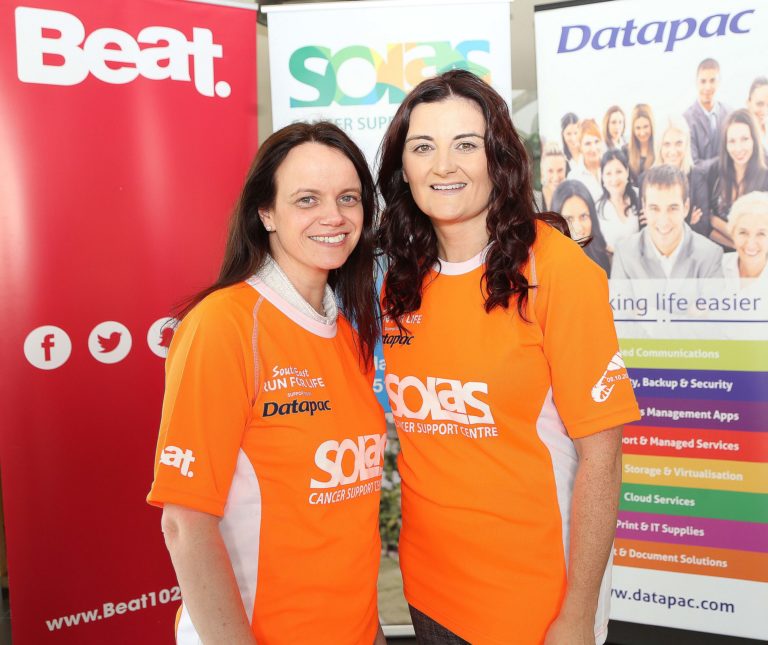 Datapac, Ireland’s leading ICT solutions provider, today announces that it will once again partner with the Solas Cancer Support Centre to sponsor the 2017 South East Run for Life. 2017 will mark the fourth year that the Datapac has partnered with the charity to help raise vital funds for the centre. The event will take place on October 8th, and more than 2,000 people are expected to take part.

One of the leading cancer support centres in Ireland, the Solas Cancer Support Centre strives to empower those affected by cancer. The centre provides people diagnosed with cancer, and their families, with access to essential services such as counselling, relaxation therapy and group support, all at no cost. It receives no official funding, and is 100% reliant on income raised through community support and fundraising initiatives to enable it to provide these services. First opened in 2011, the Solas Cancer Support Centre is now supported by over 70 volunteers, 25 counsellors and therapists, five community employment scheme workers and four staff members.

In October of every year, the centre encourages people to show their support and turn the streets of Waterford orange by donning a Solas Cancer Support centre t-shirt and taking part in the Run for Life.  The event attracts runners from all around the south east to participate in either the challenging 10-mile run, aimed at the more accomplished runner, or the shorter 5-mile ‘Walk for Life’ which is geared towards families and less experienced athletes. A record number of people took part in last year’s event, and this year the Solas Cancer Support Centre is hoping to grow that number again.

Dr Brian Creedon, chairman, Solas Cancer Support Centre, said: “Last year over 2,000 participants took part in the Run for Life, and this year we are aiming to exceed this number and have one participant for every one person diagnosed with cancer each year in the South East. I would encourage people to participate in either the 10-mile run or the 5-mile family walk, as it is always an inspiring event to be part of.  We are extremely thankful to our event partners, Datapac and Beat who are so loyal in their continued support, and also the hard-working Run and Walk for Life voluntary committee who give such much of their valuable time and expertise to this event every year.”

Karen O’Connor, general manager service delivery, Datapac, said: “Datapac is delighted to have the opportunity to partner with the Solas Centre for the fourth time to launch the 2017 South East Run for Life. The Solas Cancer Support Centre relies on charitable contributions to enable it to continue doing the important work that it does, providing valuable services to those affected by cancer throughout the south east. Datapac would like to encourage people throughout the region to dust off their running shoes and take part in this year’s run, or sponsor someone who is participating.”

Those who wish to take part in the event can download a sponsorship card from www.solascentre.ie, or collect one from the Solas Cancer Support Centre at Williamstown, Waterford. Sponsorship cards are also available from Beat 102 103 studios and AIB branches in the South East.

More information can be found on the ‘Solas Centre South East Run for Life’ Facebook page, on Twitter @solascentre or by calling the Solas Centre on 051 304 604.