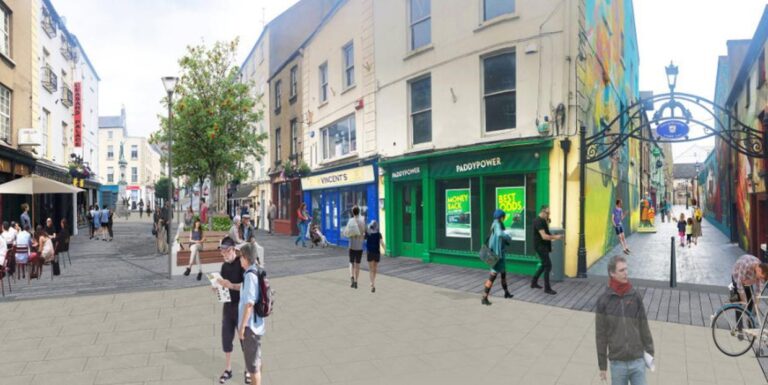 County Wexford Chamber welcomes the developments for New Ross town centre pedestrianisation. “We are fully supportive of this application, we appreciate the detailed consultation you engaged with in the chamber and its members in relation to this proposal. We see this proposal as a vital component in the economic development of the town, it will provide an opportunity to create a more vibrant town centre and will develop a cultural hub with opportunities for outdoor dining. It will greatly enhance and encourage town centre living and will link with existing public realm developments. The footfall generated will increase economic activities and will be of great benefit to retailers and food outlets.”

Quay Street in the centre of New Ross is to become an entirely pedestrianised area as part of an ambitious new development proposed by Wexford County Council. The works will see the street pedestrianised from the roundabout on the Quay to the Tholsel and its junction with South Street, North Street and Mary Street. Following consultation with business owners, local employees and residents in the area, Director of Services Eamonn Hore presented the plans to revamp Quay Street to elected members at the meeting of the New Ross Municipal District.

Mr Hore began his presentation by explaining how there had been two options mooted by Wexford County Council as it sought to modernise the centre of New Ross and increase footfall and economic activity in the town. In addition to Quay Street, South Street (North) was also considered as a viable site for pedestrianisation, however, a survey carried out by the council revealed that Quay Street was the preferred choice for the majority of stakeholders.

“Both options were viable, but Quay Street was favoured on the technical survey,” he said. “Apart from the technical issues it had to be favoured from a practical point of view, so we considered business owners’ opinions, parking, traffic considerations, junction capacities, public opinion, linkages, tourism, the new greenway, health and safety and how it could be developed as a public realm space.”

Mr Hore revealed that a survey carried out in May of this year asked 87 respondents whether they would prefer the pedestrianisation of Quay Street, of South Street, or no pedestrianisation at all. Of those surveyed 25 were business owners, 30 worked in New Ross, 14 were residents of the town, two were suppliers to businesses in the town, and 16 were visitors/users of the town.

39 people said they would like to see Quay Street pedestrianised, 14 South Street, with 34 against any form of pedestrianisation at all. Further highlighting the suitability of Quay Street, Mr Hore referred to a study which had tracked the number of people using the adjoining Conduit and Cooks Lane in the first six months of this year. The figures showed that over the course of a calendar year 62,370 people would pass through Conduit Lane with 39,654 using Cooks Lane.

Cathaoirleach Councillor Michael Sheehan described the proposal as a “once-in-a-generation opportunity” and a chance to “have a complete pivotal stamp on the downtown area in terms of plan, funding and direction”. “Coupled with the greenway being in full swing by 2024 we really have to move on this,” he said.

There were however, some concerns, albeit minor, among the other members. Councillor Michael Whelan described Quay Street as the “ideal option” but did stress that the loss of a disabled parking space would have to be made up for in another part of the town. For his part Councillor John Fleming had reservations about the unoccupied premises on the street and how they could be developed in line with this exciting new venture.

Councillor Bridin Muprhy was fully supportive of the proposal but asked that a plan be implemented to “attract or incentivise businesses on to that street”, and Councillor Anthony Connick asked that all the landlords on the street be contacted directly for their opinion on the proposed development. Perhaps the greatest opposition came from Councillor Pat Barden who asked, “If pedestrianising a street leads to increased footfall and business activity why is everyone on South Street not in favour of pedestrianising that street? That’s where all the businesses are. There’s very few on Quay Street. I would like to take time to consider the report, I wouldn’t be rushing to pedestrianise Quay Street at the moment.”

“No one’s rushing,” countered Cllr Sheehan. “There’s going to be a huge amount of engagement, we need to make a decision to allow the lads to go ahead and put the applications together.”

“There seems to be only one option and that’s it,” replied Cllr Barden.

“There were two options,” answered Mr Hore. “You have to come down to one. And Quay Street was favoured. Two options were looked at, everything we’ve done and all the surveys point to Quay Street being the best option. Everybody wasn’t against South Street, it’s wrong to say it was discounted, it wasn’t. The chamber did go to every single business, the vast majority who came back were business, we’re happy that everyone who needed a say, got their say.”

Replying to the other queries councillors had raised, Mr Hore confirmed that there would be no cut down on disabled spaces and that the street would be paved and would, ultimately, be “better than Monck Street” in Wexford town. “It will be completely paved and have street furniture, bicycle stands, new lighting, to up night time economy.”

Regarding unoccupied premises, Mr Hore confirmed that not only had one of those premises been bought but that its purchaser had done so with pedestrianisation in mind.

“We contacted the person that bought Noreen O’Donnell’s and he said the only reason he bought it was the impending greenway and the fact he heard Quay Street might be pedestrianised.”

A motion to approve the development was then proposed and seconded before Cllr Sheehan asked the members to vote for or against the pedestrianisation. All voted in favour bar Cllr Barden who abstained.