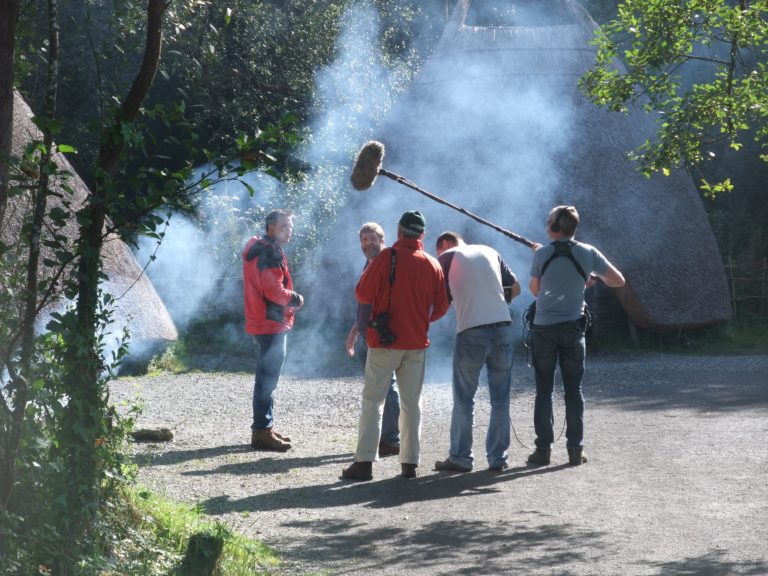 The newly revamped Irish National Heritage Park in Ferrycarrig is to feature prominently in a major new series from RTE.

‘Secrets of the Irish Landscape’ is a three part series presented by popular television presenter Derek Mooney, which tells the history on how the Irish landscape came to be, using the very latest scientific research. It features some of Ireland’s leading minds to present in an engaging way the story of Ireland’s natural history as we now understand it. The series begins at the end of the last Ice Age and covers the key turning points of our natural history right up until the present day, including the impact that humans have had on the landscape. The impact of our earliest ancestors is explored in Episode 2, much of which was shot on location in the Heritage Park and highlights some of the amazing reconstructions of houses, forts and religious sites, most of which have been completely rebuilt over the last 18 months. The series begins on Sunday 5th May with an introductory sequence to Ireland’s geology, flora and fauna. The next episode which features the Heritage Park will be broadcast on Sunday 12th may, 6.30pm RTE1. Don’t miss it!’

On the 18th & 19th of May at the Irish National Heritage Park the Waterford Living History Society will bring history to life by re-enacting early medieval daily life. We will recreate a Viking extended family, living and working, cooking and crafting. Come and talk to us, see and handle some of the armour and weapons of the time, ask about our clothing and food – it really is living history!