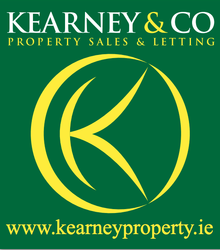 Well known Wexford Auctioneer, Kearney & Co., have recently moved from a first floor office in Redmond Square to a quay front location on Commercial Quay.  The move is the first phase of the company’s strategy to further enhance its profile and visibility.  In doing so, they have consequently enhanced the appearance of Wexford’s Commercial Quay, by adding new life to one of the quay front’s most prominent buildings that has remained vacant for some time.

Husband and wife team, John and Sarah Kearney opened their property sales and letting business in Wexford in 2010, after 20 years of working in sales in Dublin and London.  Despite the turbulent environment in which they found themselves, the business established itself quickly and soon gained a reputation as a market leader within the property industry in Wexford and beyond.  Now almost 5 years on, this growth necessitated the move to bigger, more prominent premises.

“The past few years haven’t been the ideal time in which to establish and build a new business”    admits John, “but we recognised a need for an auctioneer in Wexford with a fresh approach who hadn’t been caught up in Celtic Tiger mayhem.  Despite the challenges, we made it work and that is why Sarah and I are immensely proud that we are launching Kearney & Co. on Wexford’s Commercial Quay.  Our move of office is the first step of our development plans.  We are developing new roles within the business, expanding our team and further investing in technology and marketing.”

The new premises was officially opened by Mayor George Lawlor who in his address, alluded to how the development of this company and resulting job creation, is indicative of the positivity that is beginning to occur in the property market in Wexford.  A green ribbon was cut by the Mayor and the launch was attended by many members of the local business community and well-wishers.  Visit www.kearneyproperty.ie or call 053-9123015 to view current properties on offer from Kearney & Co. Property Sales and Letting.