Unveiling the new sign at the entrance to the National Opera House, Minister Humphreys said: “I am delighted to be here this evening for the official naming ceremony of the National Opera House in Wexford. Wexford has become synonymous with world class opera in recent years, thanks to the high quality productions staged here. This is an internationally recognised artistic institution which makes a hugely positive contribution to the local economy. I am committed to ensuring a regional balance in arts provision across this country, so that communities like Wexford can have access to a wide range of top class cultural experiences. Wexford is the home of premier opera in Ireland. Recognition as Ireland’s National Opera House will help to secure this position and should also help to attract some of the world’s best opera to Ireland’s South East.”

Also present at the event was Minister for Public Expenditure and Reform, Brendan Howlin and leading local political, business, tourism and community representatives.

From its opening in 2008, the state-of-the-art venue is Ireland’s only acoustically purpose-built Opera House and is a major addition to the nation’s cultural infrastructure, winning numerous national and international architectural awards as a result.  It is a year-round cultural receiving house for opera and also for multi-disciplinary performance art-forms.  To date, over 2,000 events of all genres have been staged in the National Opera House to almost 350,000 people, underlining the unique venue’s significant and increasing major contribution to the local, regional and national economy.  It is also the home of Wexford Festival Opera, one of the world’s leading opera Festivals, which annually attracts audiences from home and abroad who travel to Wexford to experience this unique cultural celebration.

Commenting on this landmark occasion, Chief Executive of Wexford Festival Trust, David McLoughlin said, “This further official state recognition of the National Opera House by the Minister for the Arts is a significant occasion in the development of this unique national cultural asset, enabling us to further build on the State’s prior investment in its creation and to further enhance its cultural, economic and societal contributions nationally and locally.

As Ireland’s sole nationally recognised Opera House, given its unique characteristics and the very specific acoustic and design criteria which it fulfils as Ireland’s only purpose-build Opera House, Ireland is no longer the only country in Europe to not possess a National Opera House. The official national status and state endorsement is recognition of this major addition to the nation’s cultural infrastructure and also of the Irish people’s prior investment, via the Department of Arts, as the predominant funder of the state-of-the-art facility.” 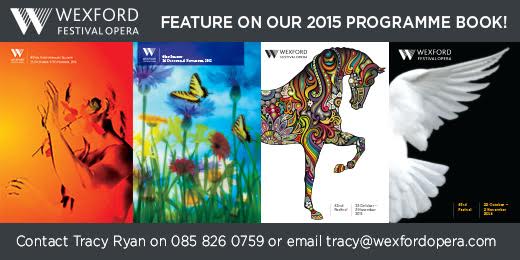