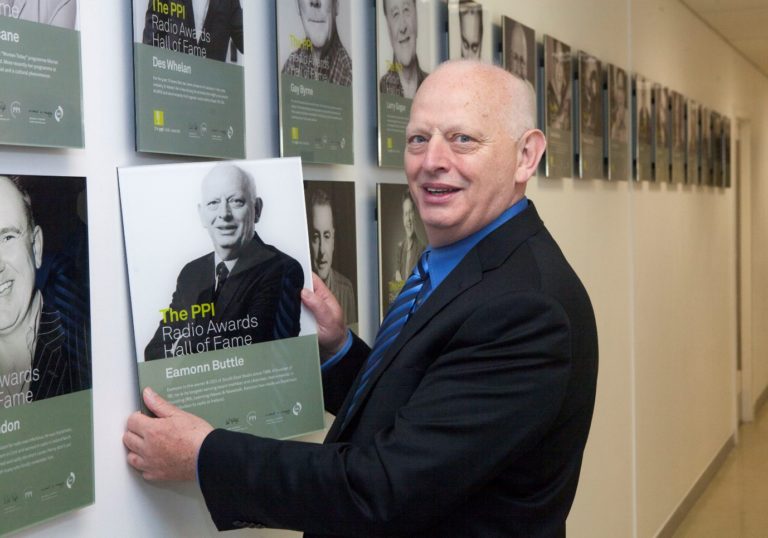 Eamonn Buttle is the owner and CEO of South East Radio since 1989. A founding member of the Independent Broadcasters of Ireland (IBI), he is its longest serving board member and also its longest serving Chairman. John Purcell, current Chairman of IBI said “Eamonn Buttle has had a huge impact on the independent radio sector in Ireland. Despite working in media for the past 30 years, Eamonn has never lost his enthusiasm for radio and continues to play an active role in the development of the sector. He is responsible for giving many of Irelands’ radio broadcasters their first start on radio and has instilled in them his own enthusiasm and love for the medium. His induction into the PPI Radio Awards Hall of Fame is well deserved”.

Actively interested in the development of the independent radio sector, Eamonn was instrumental in the founding of the radio sales house IRS, the industry training body Learning Waves and the first national talk radio station, Newstalk. He has also represented independent radio on the Boards of ASAI, People of the Year Awards, JNLR and the Digital Board of Ireland.

Liam Dwyer, Station Manager of South East Radio said “We in South East Radio are privileged to work with Eamonn Buttle on a daily basis. His impact on the wider radio industry cannot be understated and radio stations throughout the country will remember changes such as the removal of the 3% levy on broadcasters and the increased JNLR sample size for local radio stations which Eamonn was instrumental in achieving. The staff of South East Radio are extremely proud that Eamonn is being recognised by the radio industry and inducted into the PPI Hall of Fame”.

President of Wexford Chamber, Karl Fitzpatrick said “Eamonn truly deserves the recognition that he has received from the radio industry. Innovation has been the hallmark of Eamonn’s success to date and I have no doubt that this trend will continue, as he is wholly committed to addressing the prevailing needs of businesses throughout the region.”