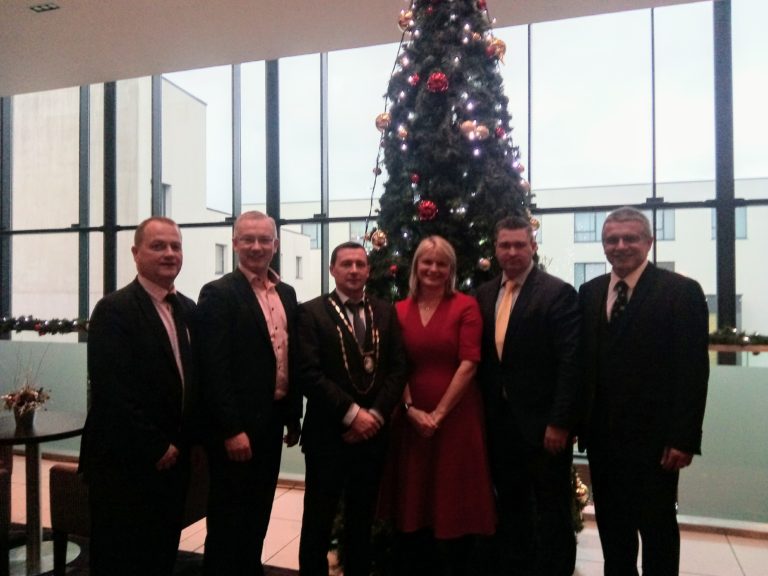 The managing director of Twitter Ireland, Sinéad McSweeney, has addressed a Chamber lunch event in Wexford and outlined three of the key components of effective leadership as – being perspective, integrity and resilience.

Ms McSweeney was the special guest at the lunch in Clayton Whites Hotel sponsored by the Local Enterprise Office and Wexford People Newspapers.

Married to barrister Noel Whelan from Ballycullane, Ms McSweeney is no stranger to Wexford but she said it might be more accurate to describe it as being the “modest” rather than “model” county as it tends to be shy about proclaiming what it has to offer.

A qualified barrister, Ms McSweeney has held a number of high-profile political advisory roles and she also served as Director of Communications with the Gardaí and also the PSNI.  “I think it is important to say publicly that I had the privilege to work with some of the most decent people in the Irish Public Service during my time in the Gardaí” she said.

During her time working with the force Facthna Murphy was Garda Commissioner and Ms McSweeney said he went from someone who was sceptical about Twitter to a person who asked why the Gardaí didn’t have a Twitter account, within a short space of time.  “He realised there were new tools that could be utilised”

Ms McSweeney said the importance and significance of Twitter became very apparent during the visits to Ireland by the Queen of England and also President Barrack Obama, “It was one way we could get to the public, information we required”

With regard to Twitter and the importance of utilising digital platforms to their full potential Ms McSweeney told the attendees that they enable people and organisations to “have a bigger footprint that their foot” on the world. “Ireland has had an imprint (on the world) that is bigger than its foot” she said.

With worldwide recognition Twitter has 3,500 employees globally and there are around 250 people working for the company in Dublin.  “We place a huge emphasis around mental health and well-being within the office” said Ms McSweeney before focusing attention on the importance of a healthy life balance.  She paid tribute to the work of Wexford County Council and the Chamber in enabling the county to recover from the recession but she reiterated her point about the County being “modest” and encouraged people to stand up and “tell the story of Wexford”  She described her political advisory role as “a strange one” because “you have to advise people without them realising that you are doing it”  It was a description that caused a ripple of laughter from the audience.  The main focus of Ms McSweeney’s address was placing attention on how experience and ongoing work and life learning can enhance a person professionally and personally.  Describing life as a journey she placed importance and emphasis on the “people we meet and the principles we learn on the journey” “If you do something, and even if you find reasons why you shouldn’t have done it, then there is something to learn from that” she said.  She said some people “are born leaders while others learn the necessary skills to lead efficiently along life’s journey”.  Ms McSweeney also commented that the transformation of effective leadership is a “lifetime endeavour, it has to be based on life learning” she said.  “People who have a great mindset learn from mistakes as well” she added.  “We need to encourage young people to do things that they could not possible imagine.

Now fast becoming one of the most globally important and powerful women within the digital world, she said her journey to leadership began as a result of her taking her first “proper job” in Leinster House.  She entered there as part of a team and said it equipped her with the skills necessary to develop her career, but significantly it also empowered her for the job she really wanted.  “In 1996 I asked Bertie Ahern for a job and that was based purely on what I had learned up to that point”.  Emphasising that utilising ongoing experience is the path to professional progress, she said what she learned within the Department of Justice in Leinster House enabled her to apply for a role within the PSNI (Police Service of Northern Ireland) at a time of very significant change, when it was being transformed from the RUC to the PSNI, and a strategic campaign was launched to entice more Catholics into the service. “I was “youngish” and “Catholicish” at the time, she said, adding it was a major endeavour in her role as head of the Department of Media and Public Relations, but she said that the most antipathy she experienced was from “the Sinn Féin side of the house”  “That is where my leadership journey began” she said.  “It was the first time I got to observe leadership in all its forms” she added, before commenting that policy leadership is “very interesting”

She then emphasised the three key components of effective leadership – as being perspective, integrity and resilience.  “You have to be true to yourself” she said.  “That is hugely important and you have to have the ability to get back up again” she added.  “A lot of people are born strong but other people have to learn it” She outlined what it takes to be an effective leader.  “A confident leader knows they don’t have to be the smartest person in the room, but they know that they need to have the smartest people in the room”  Ms McSweeney added that leaders also need to care for the people they are guiding and when people know that this is the case they are happy to be led.  “In my experience it has to be people first and then profit, and everything else will follow”.