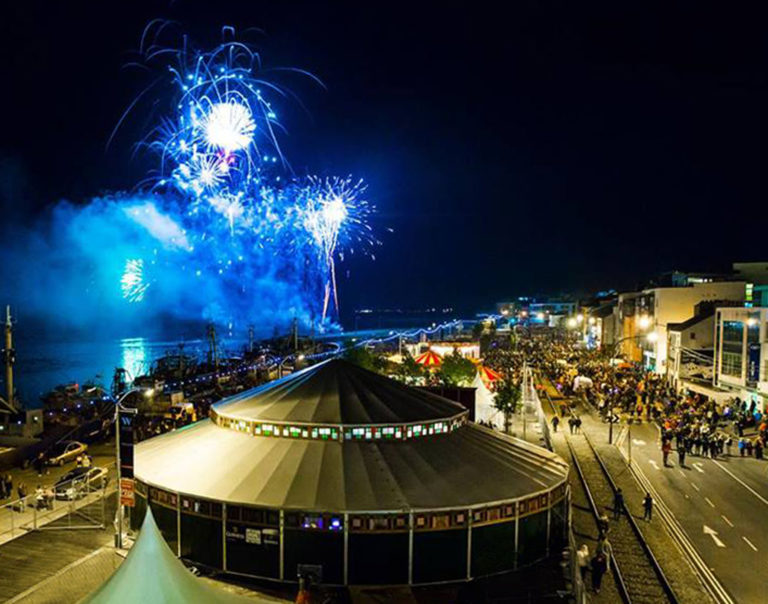 The Wexford Spiegeltent Festival is proving to be very popular with audiences, with 4 shows already sold out and several more with limited availability. Albert Hammond, Bell X1, Steve Earle & the Dukes are sold out as is Dylan Moran’s Saturday night show. The Festival organisers have added a second Dylan Moran show on Sunday 18th October.

Several other shows including The Stunning, Rocky Horror Picture Show, Jack L and Al Porter are selling very well and customers are advised to book early to avoid disappointment.

There is an excellent array of local talent in the programme this year, including Corner Boy, the South Sea Collective and the Wexford Male Voice Choir.

South Sea is a musical collective in Wexford that was originally formed with the common goal of staging shows in unique and secret locations around the county. On October 20th, six acts will combine their efforts and stage a collaborative night of original music on a single stage. The acts include Basciville, Callum Orr, Dan Comerford, Paul Creane & The Changing Band, Paula Cox & The Man Whom.

The Wexford Male Voice Choir with Special Guests the RHAWADER Choir from Wales will perform a lunchtime concert at this year’s Spiegeltent Festival.

Wexford Male Voice Choir was founded by Dr. George Hadden in 1941 and is now believed to be the longest established Male Voice Choir in Ireland. Hundreds of Wexford men have passed through its’ ranks since then and the Choir has continued to grow and develop over the years, mainly due to the commitment of its members and the support of the people of Wexford.

Over the years the Choir has performed in Concerts and Competitions all over Ireland, as well as in England and Wales. In 2001 we had the privilege of singing in Boston, U.S.A. and in March 2002 the Choir was honoured to sing at the first ‘Official’ St. Patrick’s Day Mass in Westminster Cathedral, London and then to perform at a Concert in Trafalgar Square, that afternoon, to an audience of over 50,000.

Following two sellout shows in the Spiegeltent last year, local heroes Corner Boy return to headline the 2015 Festival. Playing their first ever show at the Other Voices Derry music trail in February 2013, Corner Boy have gone on to perform at some of the biggest festivals in the country including Electric Picnic, Westport Festival, Indiependence and Knockanstockan.

Friends from the farmlands of rural Wexford, unusually emigration was the spark that ignited the flame bringing the five members of Corner Boy together. Having left Irish shores for Canada, lead singer Michael returned home revitalised after immersing himself in the vibrant Montreal music scene. On his return the five friends joined forces to form Corner Boy.

Corner Boy’s music blends together traditional Irish instruments and folk progressions with contemporary musical themes. Their style gently nods to Northern American folk and layers each tune with soaring vocal harmonies. All of which gives Corner Boy its distinctly energetic sound juxtaposed with a haunting narrative.

Tickets are on sale on www.wexfordspiegeltent.com and at the Box Office, 1 North Main Street 0539199199.

From its inaugural year in 2012, the Wexford Spiegeltent Festival has grown to be one of the biggest and most successful multi-genre festivals in Ireland. Set in the beautiful surroundings of the Paradiso Spiegeltent, the Festival has a unique and enticing atmosphere, blending the Olde Worlde feel of the Spiegeltents with the best in popular entertainment. Ticket sales for the Festival events have grown from 4,100 in 2012 to over 14,000 in 2014.

The 2015 Festival runs from Wednesday 14th to Monday 26th October.